Classic white diamonds and bright emerald greens often mixed with blues and purples ruled the red carpet at yesterday’s 69th annual Golden Globes Awards. Here’s who we thought were the jewelry winners of the evening:

Angelina Jolie wore a mesmerizing ivory colored Atelier Versace gown with scarlet red detailing that matched both her clutch as well as her famed pout. She paired the gown with a set of exquisite 25 carat diamond studs and 12 carat platinum and diamond ring.

Having a second child only five months ago, Jessica Alba looked spectacular in a dark pink Gucci strapless gown which she paired with a set of diamond dangle earrings, a diamond ring and diamond and platinum bangle bracelet.

Sofia Vergara looked stunning in a dark blue Vera Wang gown. However, it paled in comparison to the exquisite set of 31.58 carat diamond earrings, two stacked intricately designed 62.72 carat vintage style diamond bangles and two rings she wore all rumored to be worth at least $5 million.

Emily Deschanel chose an interesting play of colors by pairing a set of diamond and emerald drop earrings with a a royal blue Grecian gown.

11 Creative Ways to Wear a Brooch 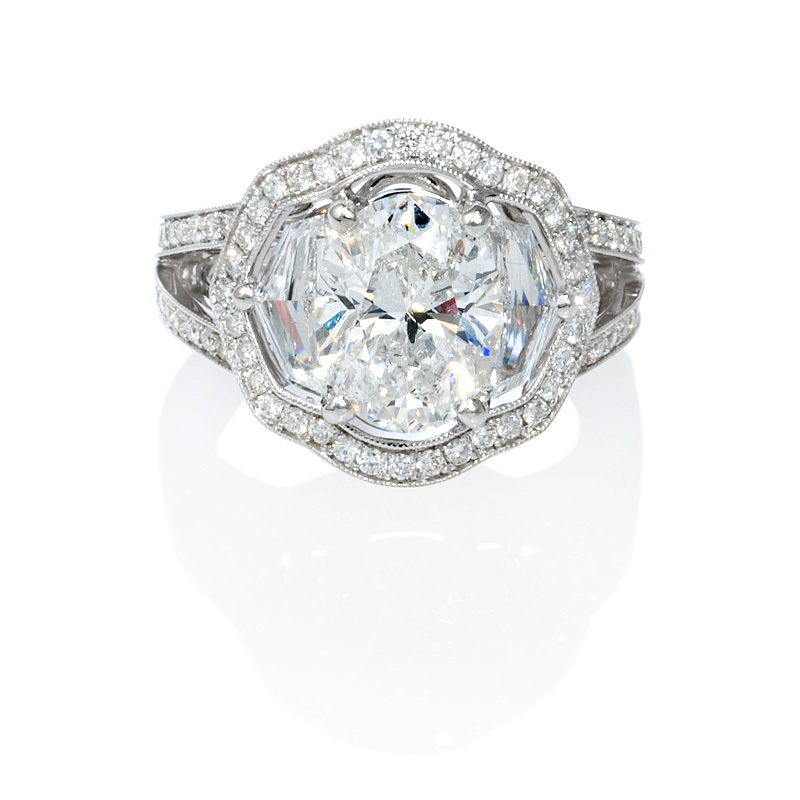 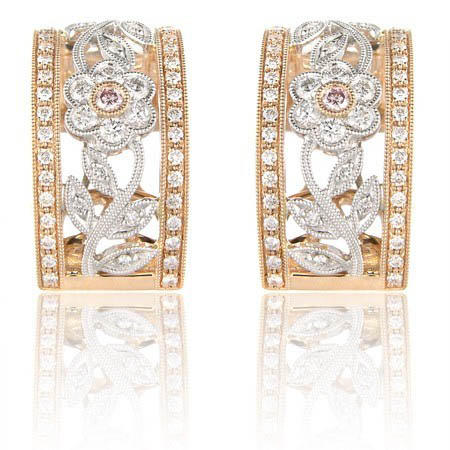 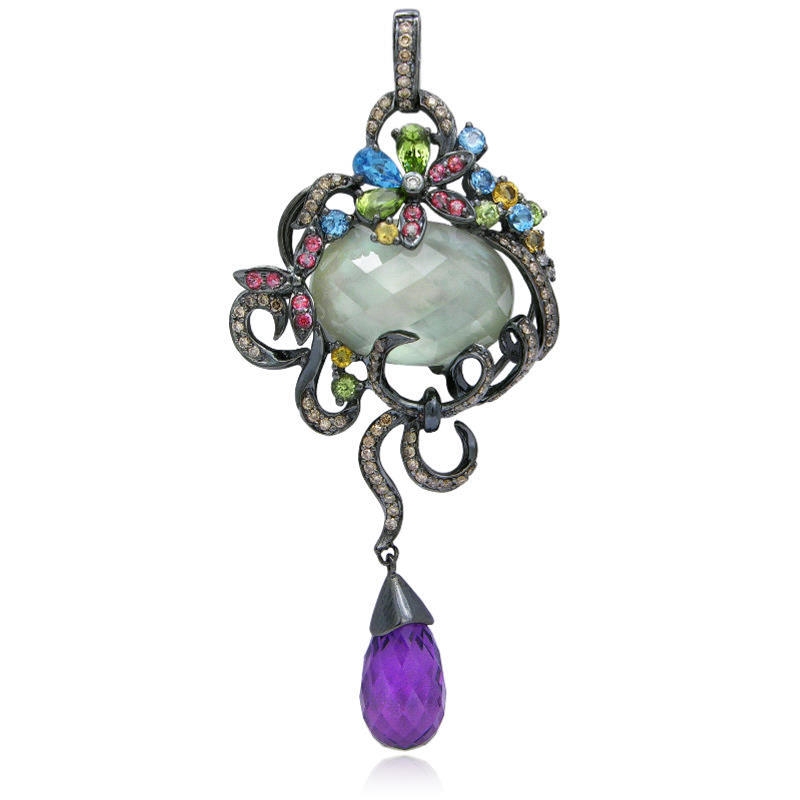 The Art of Color

Wondering how to accessorize color in your wardrobe this season? A fashion color report released by the Pantone Color institute has identified the top 10 most directional hues for Fall 2011. The organization surveyed New York Fashion Week designers including Chris Benz, Peter Som, MACKAGE, Tommy Hilfiger, Tracy Reese and many others to reveal their inspiration.

“Designers take a painterly approach to fall 2011 by artfully combining bright colors with staple neutrals, reminiscent of how an artist would construct a stunning work of art,” said executive director Leatrice Eiseman. “Much like a painter’s masterpiece, there is a certain romance to this season’s palette,” she added. Firenze Jewels has applied Pantone’s findings with our eye for on-trend jewelry and diamonds below: 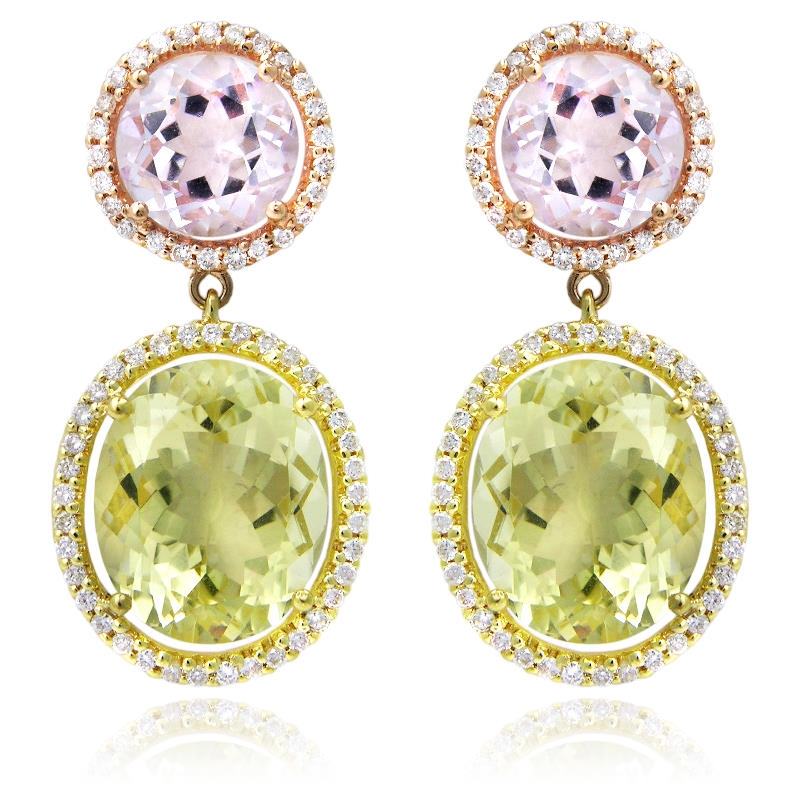 The honeycomb oval cut yellow quartz stones in these diamond two-tone gold dangle earrings reflect the color Bamboo. This hue pairs well with several of their top 10 shades including Phlox, Teal and Honeysuckle. 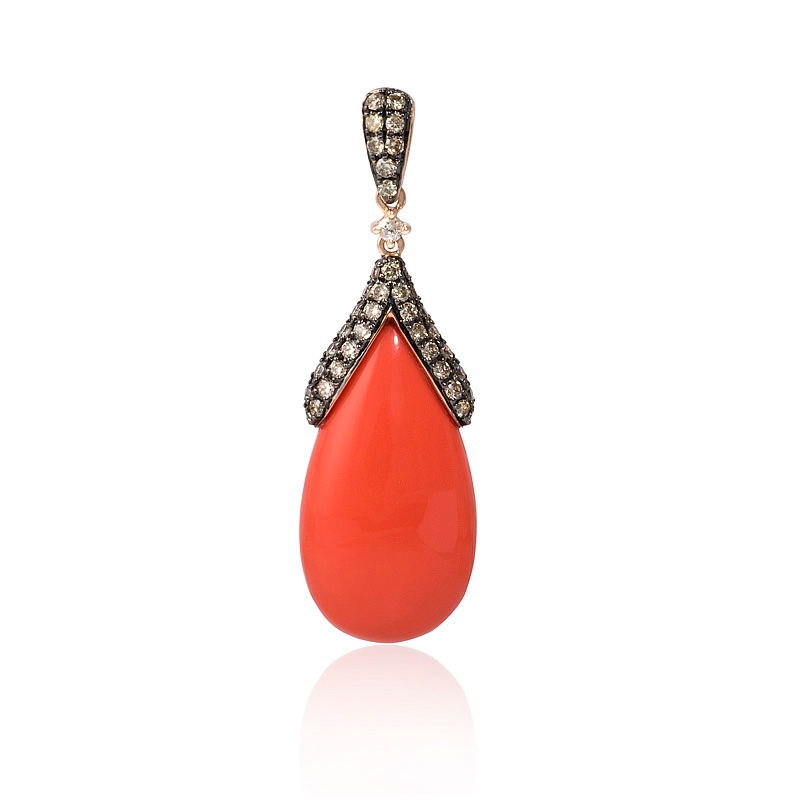 The coral stone in this diamond pendant illustrates the color of Emberglow. A traditional autumn tone, this hue works well with Coffee Liqueúr or Honeysuckle. 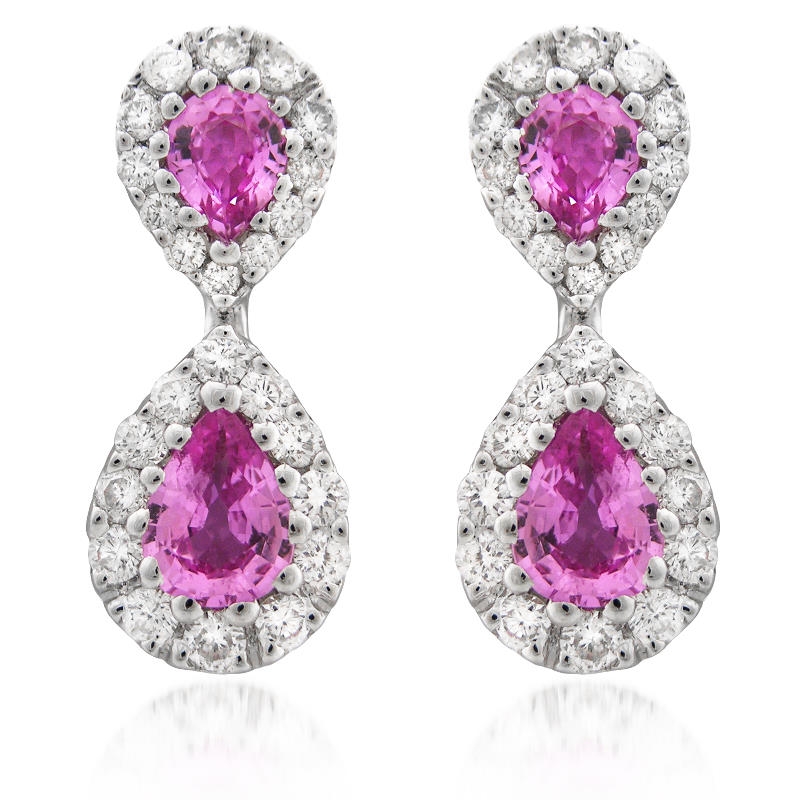 These diamond and pink sapphire tear drop shaped dangle earrings reflect the color of Honeysuckle. Versatile and bold, this color works well with neutral fall staples such as Coffee Liqueúr and Nougat or Bamboo for retro intensity. 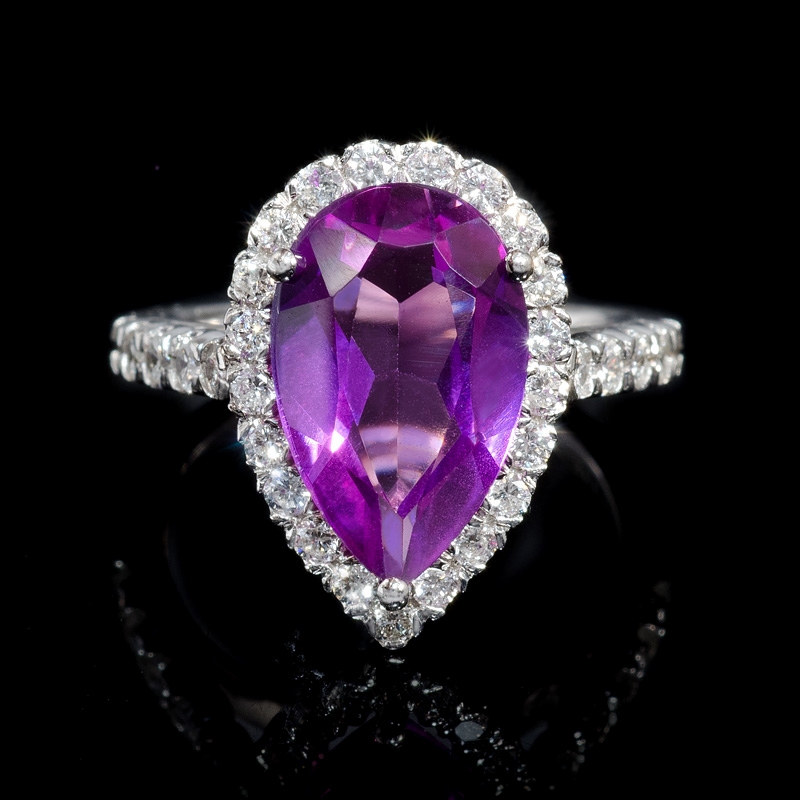 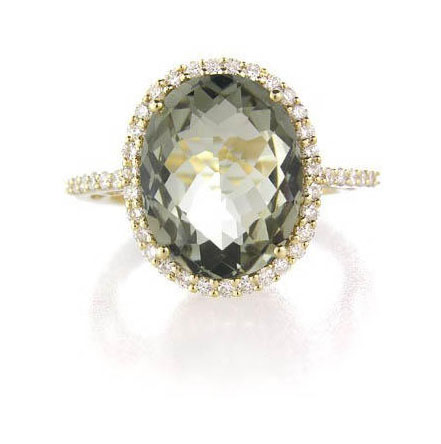 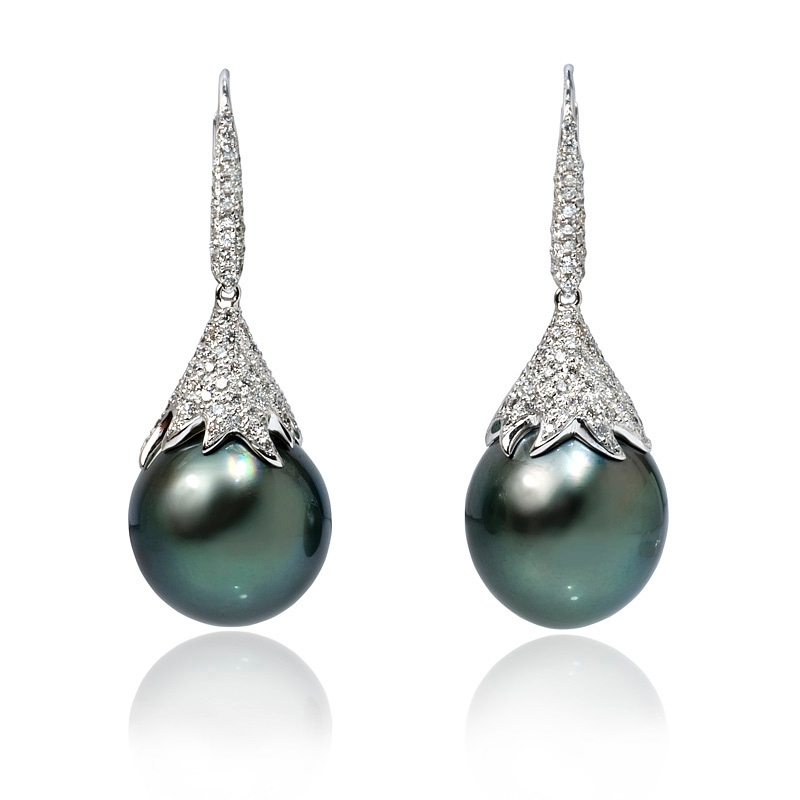 The lustrous tahitian pearls in these dangle diamond earrings shows the color of Deep Teal. A mix of ocean blue-green, this color reflects depths of the starry skies as nights grow longer. 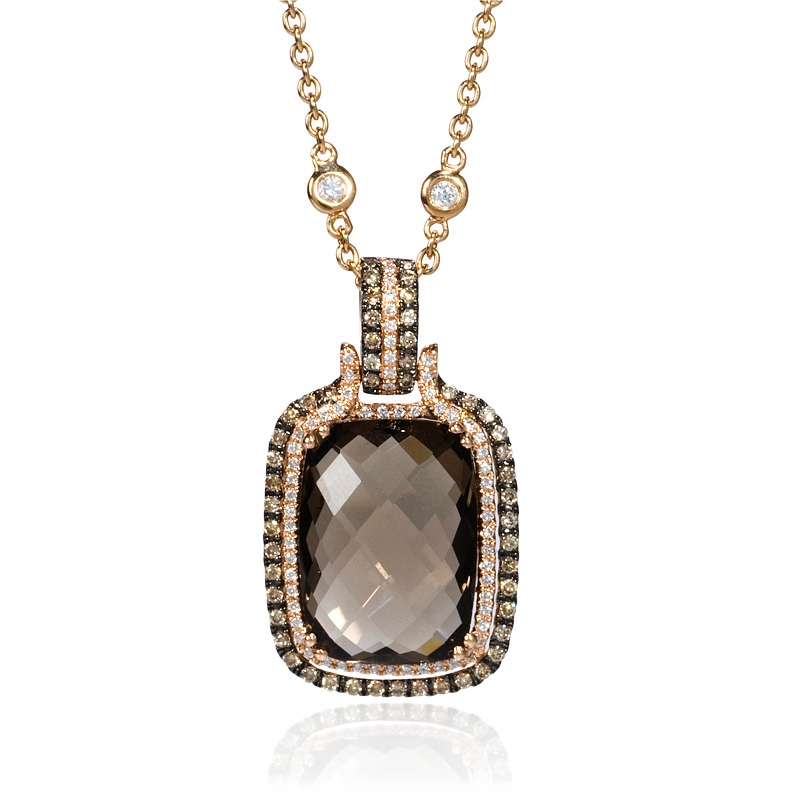 The radiant cut smokey topaz stone in this diamond rose gold pendant demonstrates the color of Coffee Liqueúr. As the name implies, this decadent tone captures the essence of Fall.

The cognac diamonds encrusted in this rose gold diamond ring reflects the color of Nougat. A warm tan hue, this color compliments Phlox, Emberglow or Honeysuckle. 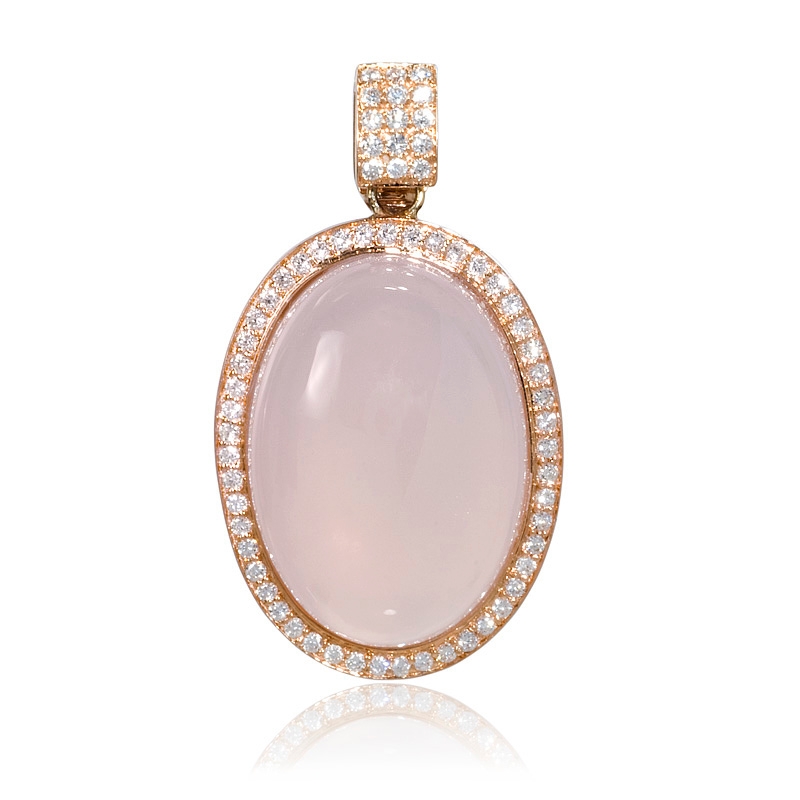 The 33.92 carat oval quartz in this diamond rose gold pendant reflects the hue of Orchid Hush. A mix of gray and hint of orchid makes this color complimentary with any of the other 9 hues in the palette.

The labradorite stones in these diamond yellow gold drop earrings reflect the color of Quarry. This practical grayish hue is a reliable fall staple.

Going big and going red were the top two jewelry and fashion themes at Sunday’s 63rd Annual Prime Time Emmy Awards. Stacked bracelets, bold jewels and antique style pieces were some of the popular trends we saw last year. This year followed suit. However, tear drop shaped dangle earrings and colorful right hand rings clearly became the newest desirable jewelry accessories for Fall 2011. We noticed a growing trend of celebrities accessorizing solid pallet ensembles with an array of white and black diamonds or color gemstones in warm tones. With red being the statement color this season, there certainly wasn’t any shortage of rubies or sapphires and semi-precious stones of this hue on the red carpet.

Here are our Emmys 2011 jewelry winners below along with some suggestions on how to grab similarly designed sparkle for a steal!

Gwyneth Paltrow arguably wore the most interesting attire of the evening.  The 38-year-old actress, who picked up an award for her role as Holly Holiday on Glee, accessorized a sheer Pucci dress with a 50 carat diamond platinum wide bracelet, a 50 carat black diamond and black rhodium link bracelet, a 5 carat diamond and black onyx platinum right hand ring (not pictured) and a pair of emerald cut black diamond platinum dangle earrings. 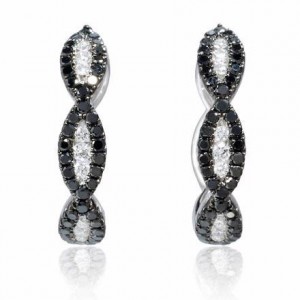 Colbie Smulders wore a gorgeous turquoise Alberta Ferrenti dress which accentuated her smoldering eyes. The How I Met Your Mother actress accessorized her look with 50 carats of diamonds including a pair of diamond platinum drop earrings, a diamond platinum bracelet and a diamond and an emerald cut aquamarine right hand diamond ring. 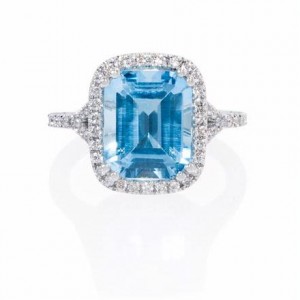 Sophia Vergara never disappoints in the fashion or jewelry department. The 39-year-old actress and Modern Family star looked gorgeous as ever in a custom Vera Wang coral one-shouldered crepe gown accessorized with an elaborate set of diamond and Colombian emerald yellow gold earrings. She wore the earrings, which feature over 100 carats of Colombian emeralds and over 60 carats of white diamonds, with an interesting 6 carat diamond and emerald dangle pinky ring and a bold diamond yellow gold cuff. 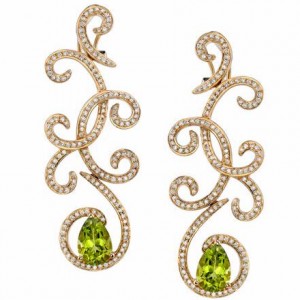 Anna Torv used a large pair of diamond and ruby dangle earrings featuring over 80 carats of carved rubies to add a strong pop of color against a black Vera Wang gown. 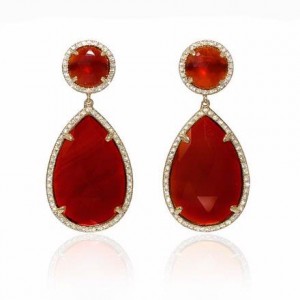 Sparkle for a Steal: If you’re looking to go big and red in one fell swoop, we recommend these exquisite diamond and rust agate 14k yellow gold drop earrings at an excellent price point.

Heidi Klum has long been a fan of working bold and unique statement jewelry pieces with her wardrobe. The 38-year-old model accessorized her one of kind strapless Christian Siriano dress with a pair of fire opal, amethyst, yellow, white and brown floral cluster earrings and a spectacular matching floral leaf ring. 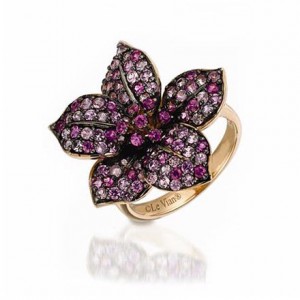 Jane Lynch did a good job of hosting this year’s Emmy’s. On the red carpet, the 51-year-old actress paired a custom David Meister Signature strapless evening gown in aubergine chiffon with a pair of vintage style earrings encrusted with a dazzling array of gemstones and stacked bangle cuff bracelets. 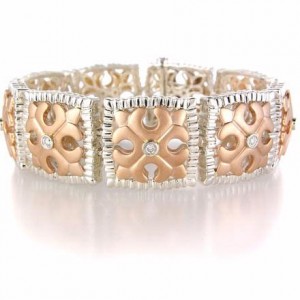 Sparkle for a Steal: This diamond 14k rose gold and sterling silver bracelet is brilliantly accented with.40 carat of round brilliant cut white diamonds.

Christie’s recently announced a landmark series of events, exhibitions and auctions devoted to the extraordinary life of Elizabeth Taylor. The global 3 month tour kicks off Thursday, September 15th and will reflect the iconic fashion and film star’s legacy through her magnificent collection of diamonds and historic jewels.

“Elizabeth Taylor’s passion for jewelry was well-known, but it is her depth of knowledge about fine jewelry that truly impresses,” François Curiel, international jewelry director and president of Christie’s Asia, said. “She collected the best pieces from the best periods, and as a result her collection boasts exquisite examples from the most celebrated jewelry designers.”

On Thursday, December 13th, Christie’s New York will host an evening auction at Rockefeller Center where select highlights will feature 80 of Taylor’s most jaw-dropping diamonds, gemstones and one-of-a-kind pieces followed by 189 additional jewels in two Day Sale sessions. Known as “the greatest private collection of jewelry ever assembled in one place”, the total selection of 269 pieces is estimated to realize more than $30 million.

The Elizabeth Taylor Diamond
33.19 carats D Color, potentially internally flawless, this asscher cut diamond was worn by Taylor daily and was the first jewelry gift from husband Richard Burton purchased on May 16th 1968. Stone is formerly known as ‘the Krupp’. Estimate: $2,500,000 – $3,500,000

The tour begins Thursday in Moscow followed by public exhibitions in London, Los Angeles, Dubai, Geneva, Paris, and Hong Kong. As a tribute to Elizabeth Taylor’s life-long humanitarian causes, a portion of the proceeds generated by exhibition admissions, events and select publications related to the sales will be donated to The Elizabeth Taylor AIDS Foundation.

Get a sneak peak into  fine jewelry fashion trends coming in 2012. In the video above, correspondents cover this year’s JCK Las Vegas event, the largest jewelry trade show of the year.  Large statement bangles and cuff bracelets seemed to have a prominent place in every designer’s collection while bold colors still remain a top jewelry drawer staple. Some of the most inspiring Platinum Innovation Award winning pieces included an antique style floral fashion ring, a platinum vintage diamond engagement ring with a modern twist featuring two halos around a round center stone and a men’s platinum and diamond wedding band.

It’s always encouraging to see any organization give back to their local or global community. Le Vian hosted Jewelers for Children fundraiser where $50 would be donated for every person that attended the event promising to donate a minimum of $115,000. This charity benefits children whose lives have been affected by illness, abuse, or neglect.  Simon G. who hosts an annual Summer Soiree coinciding with JCK Las Vegas worked hard in promoting and gathering celebrities to raise awareness for Generosity Water, a charity that helps bring clean drinking water to impoverished countries around the world.

Firenze Jewels, Inc. is an authorized LeVian retailer. If you would like to purchase any piece from the LeVian collection, please contact one of our jewelry specialists.