In 1993, a National Jeweler’s study discovered that over forty percent of consumers planned to buy a diamond that was at least one carat.  A year later, a large study sponsored by Conde Naste showed the average cost of a wedding ring was $3,576, amounting to sixteen percent of what an average couple spent on their wedding.  More recently, DeBeers’ found that four of five brides are given diamond engagement rings.

The diamond engagement ring finds its origins with the marriage of Maximilian I to Mary of Burgundy in 1477. In modern time, It was unusual to find diamond rings prior to 1870.  From that point on, and initially because of large discoveries in South African mines, diamond jewels became increasingly popular until the Great Depression caused a huge drop in the numbers of marriages.  DeBeers was the driving force in making diamonds hugely popular, and their success landed just after the end of World War II.  Their moto, “A Diamond Is Forever” is still a mantra for why diamonds are such an important part of a marriage as we move beyond 2008. 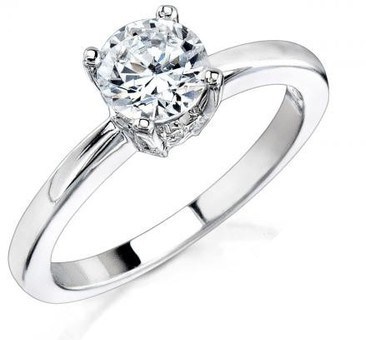