Do not give a “secondhand” engagement ring to someone! If it was a family heirloom that’s different of course. If you’ve given that heirloom to numerous wives from numerous prior marriages, and your soon to be fiancé will probably guess that, think twice. Engagement rings have far more meaning to most women than wedding rings. Remember that, as girls, diamond rings stand along-side princes in storybooks and represent all that is love.

No one wants to think about the history a ring had on the finger of a former fiancé or wife.

Educate yourself about ring styles and fashion on at least a simple level. “American consumers favor the largest rocks possible, as demonstrated by Hollywood starlets,” Ruth Donaldson, the UK manager of Platinum Guild International says. “British consumers are still living up to their more austere reputation. Ladies like a better class of diamond and lean towards the best metals being used to secure their jewels. It is strongly felt by brides that their fiancés are getting it wrong if they are just selecting the biggest rock.” 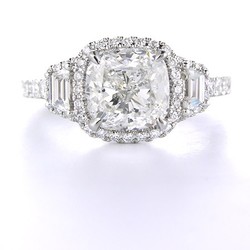